What is Handicap in betting?

Placing bets on your favourite team or player is one of the best ways to enjoy any sporting event. Depending on the game you’re watching, you can choose from a variety of bet options. In this article, we take a closer look at handicap betting — one of the most popular sports bets – and everything it implies. We’ve gone over: 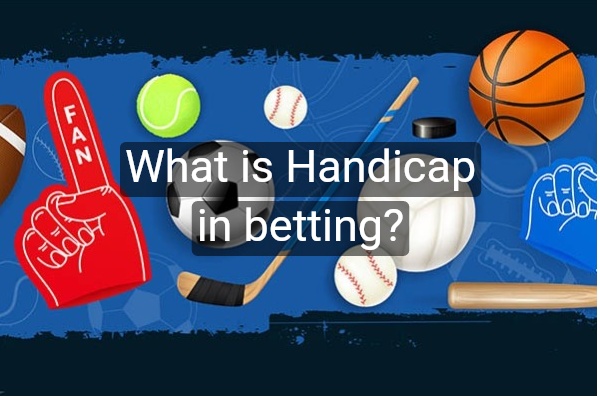 As you may be aware, the outcome of all sports is influenced by a variety of circumstances. Bookmakers interpret these criteria to determine the probability and odds of a player or team winning the game. The odds can be high or low, based on the likelihood of each outcome winning.

When the outcome is uncertain, a handicap bet is offered to level the playing field by adding or deducting a virtual goal on each selection.

A handicap bet, also known as a Spread or Asian bet, assigns a plus or negative goal to each team based on which team is considered the favoured or underdog.

Once the final results have been validated and a handicap goal added or taken from the outcome of your team or player, the handicap bet is settled.

Today’s market offers a variety of handicap betting options, including:

Everton Fc will open the game with a one-goal advantage in this situation. If you’re betting on Chelsea FC, your team must win by at least two goals. However, if Chelsea wins by a single goal, the game is declared a draw, and your stake is reimbursed. If you bet on Everton FC, it must win or draw in order for your wager to be successful. If you lose by one goal, your stake is reimbursed.

In this example, Everton FC has a one-and-a-half goal edge to begin the game. The match will not be able to conclude in a draw because there will be more than one goal. If you bet on Chelsea FC to win, it must score at least two goals for your wager to be successful. Everton FC must win, draw, or lose the game by a single goal.

Arsenal FC will start this encounter with a two-goal advantage. If you’re rooting for Chelsea FC to win, it has to be by a three-goal margin or more. If you bet on Chelsea FC to win and they win by two goals or more, your stake will be reimbursed. If you’re a fan of Arsenal FC, the bet pays off if your team loses by at least one goal. If you bet on Arsenal FC and it loses by two goals, your stake will be reimbursed.

Arsenal FC leads this match by two and a half goals from the start. If you’re rooting for Chelsea FC, the team must win by a margin of three goals or more to win the bet. If you back Everton FC, your wager wins as long as the team does not lose by three or more goals.

This is a strategy that more experienced gamblers frequently employ. It’s utilised when the playing teams are separated by a short margin.

How a Handicap Bet Works in Sports

Handicap betting in sports is a simple and uncomplicated process. As previously stated, it works by adding or subtracting a goal from one team, ensuring that no underdogs exist and that both sides have an equal chance of winning. It’s worth noting that handicap betting works in a variety of sports, including football, rugby, tennis, golf, and others.

For example, if Mike Tyson fights an average boxer, you should anticipate him to win practically all of the rounds, which is represented in the 1:01 odds. However, if the opponent is granted a point advantage, the outcome will be less predictable.

This is an illustration of how a handicap bet works: it gives one opponent an edge over the other before the match begins.

In football handicap betting, bets on teams are placed before the season begins. Each team’s handicap is determined by their chances of winning the league. Man City, for example, was assigned a scratch handicap for the 2019/2020 Premier League season, whereas Sheffield United, the relegated team, was given a +47 handicap.

Handicap in the National Football League

Without a question, the most popular bet in the National Football League is the handicap (NFL). The popularity of this product can be attributed to its simplicity. Though this wager may appear intimidating at first, there is no need to be concerned.

In this scenario, the Atlanta Falcons are facing the Green Bay Packers, and the Falcons’ handicap has been set at -45, which means you win if you subtract 4.5 points from their final score for the bet to win.

Rugby, like the NFL, attracts gamblers from all walks of life. The bet options are based on whether one team wins or loses by a specific number of points.

Consider a rugby match between Kenya Shujaa 7s and South Africa’s Springboks, in which the latter is the favourite. Kenya Shujaa could receive seven points as a result of the handicap bet (shown as Kenya Shujaa +7). Springboks might be supported at -7 points in this encounter. If you bet on Kenya Shujaa +7 and the Springboks win by six points or less, you win.

As the name implies, these handicaps are named after Asian marketplaces and apply to those in that region. This football market, like other handicap bets, is intended to level the playing field. The Asian handicap, on the other hand, nullifies all draws, lowering the probability of a match ending in a draw or loss. We also recommend you to check Zero bet in Asian Handicap betting.